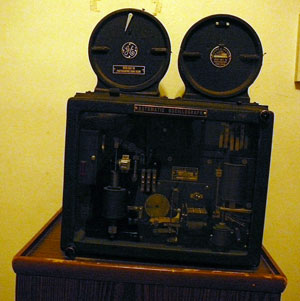 The oscillograph in the pictures was spotted at the Hoover Dam in Nevada. (It’s an oscillograph rather than oscilloscope because it creates a permanent record.) The device was used to monitor hydro-electric power lines for transients and faults, recording with a bandwidth in excess of 60Hz. The instrument dates from 1938, long before there were electronic methods of recording waveform data. The records are generated by a galvanometer-deflected light beam recording on photographic paper – up to 200 feed of it per reel.

The instrument could apparently respond to a transient in under 4 milliseconds, which is pretty amazing for such an electromechanical beast. To view a waveform, the reel would be taken in its container, opened in a darkroom, and the film developed with chemicals.

All of this could now be accomplished with much greater convenience and substantially less money by a microcontroller and some non-volatile memory.
Photographic credit: Jessica Hiscocks