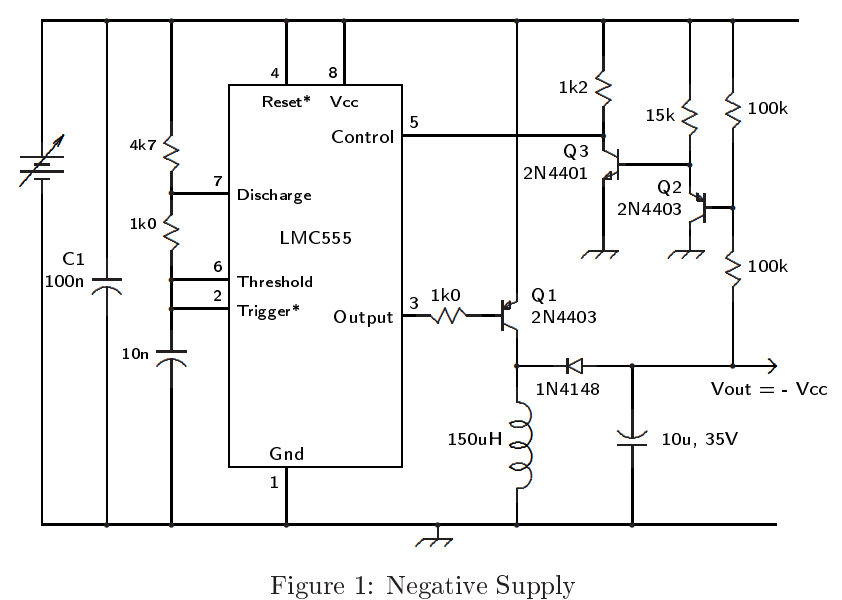 There are charge pump integrated circuits for this purpose: a switching circuit charges discharges a group of capacitors such that the output capacitor is charged negative with respect to ground. This is useful for small currents, in the order of a few milliamps, which may be sufficient for powering an op-amp or two. But charge pumps are very limited in output current capability – and some have high internal resistance, which results in poor regulation.

Then the switch opens. Current cannot change instantaneously in an inductor, so the current continues in the same fashion. A diode directs this currentinto a conductor into a capacitor, in such a manner that the capacitor charges up to a negative voltage.

There are many switching regulator integrated circuits that can be configured to generate a negative voltage in this fashion. Such a circuit can produce a few hundred milliamperes of current.

I needed a negative voltage supply that would track the positive supply over a range of 0 to +15 volts, so that the negative supply would produce 0 to -15 volts. The target output current was 150mA. Using the circuit of reference (1) as a starting point, I developed the circuit shown in figure 1. It turns out that the CMOS version of the venerable 555 timer, the LMC555, can operate down over a supply range of +1 to +15 volts. The output drives a PNP switching transistor, which pumps the 150uH inductor. When Q1 switches off, the top end of the inductor goes negative, charging the output 10F capacitor to a negative voltage.

The two 100k resistors form a voltage divider between the two supplies. For tracking to occur, this voltage should be at zero volts, so it is used as a feedback signal through Q2 and Q3 to the control terminal of the timer IC.

It’s really useful to be able to monitor the current in the inductor but there is no easy way to do that directly. I put a 1 ohm resistor in the return line to the input supply and monitored the voltage across that with the oscilloscope. That shows the current in the inductor when it is charging, so it’s possible to determine the peak current — which is the quantity of most interest.

It turns out (see reference 2) that the peak current in the inductor and switching transistor is at least 4 times the average output current. So, for 150mA output current, the switch must be able to handle 600mA. This is a consequence of the inductor waveform, which is a triangle. I decided that a circuit based on square waves would have a more favourable peak-average ratio, and so I did not pursue this circuit any further. But it might be useful for moderate output currents where a tracking supply is useful.

A caveat: the circuit of figure is not fully debugged. It needs to be tested under a range of currents and voltages. It’s likely that under certain conditions the system will be unstable and will require compensation.