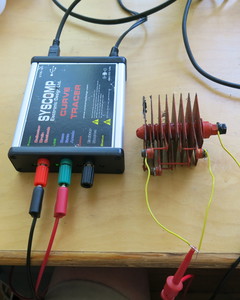 Before the invention of the silicon diode, designers had the choice of germanium point contact diodes for low currents, copper-oxide rectifiers in instruments, and selenium rectifiers for power applications. The selenium rectifier replaced the vacuum tube rectifier in the period 1950 onward and was in use until the 70’s. Selenium rectifiers are recognizable by the cooling fins, which are often painted green or orange.

We were given a three-phase selenium rectifier, taken from an ancient Honda 150 motorcycle. The alternator is wired to produce 3 sine wave outputs, each 120 degrees apart. The rectifier consists of three diodes with one common terminal, so that the output is a reasonable approximation of direct current.

The Wikipedia page on Selenium Rectifier mentions that a ‘forming current’ may be required after a long period of disuse, and long period of disuse applies in this case: it had been out of service 40 years or more.  The forming current is a minimum current to regenerate the proper operation. So we connected it to a CTR-101 curve tracer to run the forward characteristic curve.

Unlike a multimeter test, the curve tracer exercises the device under test over a range of voltage and currents, so it’s a much more informative measurement.

As you can see from the graph, the forward characteristic is a classic diode curve with a threshold about 0.2 volts, increasing to 0.8 volts at 1 amp forward current.  Switching on the measurement cursors, the forward resistance over the linear region is 0.37 ohms.

The reverse characteristic shows a reverse current of 800uA or so up to a reverse voltage of 30 volts, also very respectable.

This is the measurement of one of the three diodes: the other two have a similar characteristic.

So yes, the selenium rectifier is still functional. And the Honda 150 engine also runs just fine, and is being used to drive a home-constructed sawmill.